Five books to get you to read SF

Damien Walter prompted his followers on Twitter to share books that would get people who don’t like SF to read it, with the added incentive that the best would get a mention on the Guardian. Who could resist? 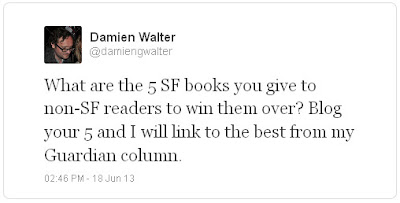 I haven’t really tried to persuade people to read books they don’t care about. I constantly share reading recommendations with likeminded people, especially on the Urban Fantasy Fans community on G+, but converting SF haters has never been on my agenda. I’m not a convert myself, as readers of this blog may have noticed, having read SF very much from the beginning in various forms, so I don’t have the book that convinced me to offer either.

The assumption behind Walter’s prompt was that SF has become mainstream enough to get people who don’t usually read it interested in trying it out. They simply need a book with which to start. The assignment is somewhat vague, but I’m assuming that he means adults set in their reading habits; children tend to be more open to try different genres. I’m also assuming certain acceptance of SF in general, otherwise the idea of SF being mainstream would be void: “So you like True Blood? Why don’t you try reading the book.” Or: “You know, as ‘exciting’ as the Total Recall remake was, you might find the original short story to be better.”

The world is full of great SF in many different subgenres and the potential books to recommend to the hypothetical initiate too many to count. Some limiting criteria are therefore needed.

Following my criteria, I can leave out some books. The Lord of the Rings may be the classic introduction to fantasy for countless generations and the movies based on it have undoubtedly helped to make SF more mainstream. But an easy read it isn’t, nor is it short. Likewise, in sci-fi, there are some names brandished as ‘must reads’. Asimov may forever have his place in sci-fi canon, but his books don’t necessarily make for ideal first reads.

Here’s my list. I’ve already written blog posts on the first three if you want to find out more about what I thought of them.

I wanted the list to have one book with space, faraway planets and aliens. LeGuin’s book has all that. It’s a relatively short book with important themes that are universal so should transcend the genre. And it’s definitely a classic. Moreover, it’s an interesting read.

Another sci-fi classic, this one more technology oriented than LeGuin’s book. I wavered between this and William Gibson’s Neuromancer, but chose this one because of the movie. If one is trying to lure another to reading SF, a good movie with a better book behind it should make the transition easier. Reading one Philip K. Dick novel can easily lead to reading more of his work and from that, the path is open.

For fantasy, I went with Discworld. There are some epic fantasy series that I’ve enjoyed a lot, but since they tend to be those huge tomes that never end, they got discarded. Discworld is a brilliant fantasy universe, the books are short and funny, and the best of them are good commentary on our world. Any of the books in the long-running series would do fine, but the original Guards trilogy is my favourite.

As an introduction to UF, Neverwhere would probably be a more popular choice. And while it’s the book that first introduced me to the genre, I actually like American Gods better. It’s longer than other books on my list, but well worth every page. It’s also the only book that I have successfully recommended to someone who doesn’t read fantasy, though the result was them reading more Neil Gaiman, not more fantasy in general. But that’s a positive outcome too.

I must recommend the entire series, because the books should be read in order and they’re all good. Dresden Files has everything that makes urban fantasy great, with a good mix of mundane and mythology, monsters and humans and themes that are important regardless of the genre. They’re action packed and fun, and the quality of the writing has remained constant throughout the series, which isn’t always given in UF, so it has a good chance of becoming a classic eventually. More importantly, they are easy to read so if one is to pick up an UF book for the first time, this one will sweep them away.

As a bonus, I’ll throw in Harry Potter. If it got boys to read for the first time, it should get an SF virgin hooked too.

My list doesn’t necessarily contain the best or most valued books there are in the genre. But they are an easy introduction to different genres, styles and themes that make SF. Besides, I like them all. How about you?

Lessons in life in children's books


The importance of reading as a child was made clear by the new British Children’s Laureate, Malorie Blackman. She told in an interview how her father thought reading fiction was useless and how she read it despite, learning, as she said, “more about people and relating and communicating with other people through fiction books than I ever did through non-fiction.” When I shared the interview on Twitter, one person told me that he had learned about black culture for the first time through Blackman’s books. And those lessons had stuck. A child’s mind is very flexible and impressionable so what we read as a child makes an impact for life. If we’re lucky, the impact is positive, the lessons learned those that make us better people.

There wasn’t any racial diversity in my country when I was growing up so there wasn’t literature for children about it either. Instead, children’s books addressed social issues like growing up with a single parent, though I was an adult before I understood that aspect of those books. Nevertheless, the lesson learned; I can’t remember ever wondering why some of my friends didn’t have two parents.

Some books taught me about empathy, for example. At seven, I read a series about a girl who had to face the horrors of two wars between Finland and the Soviet Union (1939-44). She had to twice leave her home village on what eventually became the Soviet side of the border and relocate among people who didn’t really want all the refugees they now had to deal with. While written especially for children, it was heavy reading for a small girl. However, I learned immensely from those books and three decades later, when reading about refugees of any war, the books and the emotions I felt when reading them still return to me.

One series is above all else, however, when it comes to learning about being different and accepting people as they are: the Moomin (1945-1970). Their author, Tove Jansson (1914-2001), was a member of two minorities. She was a Swedish-speaking Finn (about 10% of population in her youth) and she lived in a same-sex relationship at the time when they weren’t acknowledged socially or legally. She was also an artist. While the cultural elite in her youth consisted mostly of the Swedish-speaking Finns, giving her slightly better chances at becoming an artist, it still wasn’t an easy career choice for a woman.

Moomins were first created as a diversion from the horrors of the war, which explains some of the tone, although the characters got their inspiration from Jansson's family. They are trolls with big snouts and pretty tails who live in the Moomin Valley, a peaceful place away from everything. Their big house is always open for friends and a wide cast of characters visit them constantly, each quirkier than the other. Everyone is accepted as they are, the scary ones included, and even the silliest find understanding in the end. The lifestyle of the Moomin family is rather bohemian; they head on adventures on a moment’s notice and show fondness for good Whisky. They’re anarchic too, defying authorities at every chance. 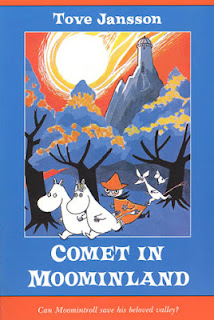 Despite the idyllic settings, the Moomin books aren’t exactly light reading for children. From the more easily understood lessons like ‘always be kind to others’ they stretch to handling natural disasters and the end of the world. I was especially impressed with Comet in Moominland, which I read when I was about seven. In it, a great comet threatens the Moomin Valley, the tone of the book that of immediate doom as the comet comes nearer. There are portents along the way, and even the cover is scary. It didn’t surprise me in the least to learn – as an adult – that the book is thought to be a commentary on the atomic bomb. As a child of the Cold War, the fear I experienced reading the book was the same I felt about the nuclear threat. The book allowed me to process that fear.

The Moomin books were written at a time when books for children could handle truly difficult issues, like death. Nowadays, the trend is different. When the Moomin characters were turned into a Japanese animation in the 1990s, everything controversial was cleaned away. The series is beautiful – and lifeless. If it’s the first encounter one has with the Moomins, one will never learn all about them. And while the animated series most likely creates a beautiful childhood memory, it won’t teach you the life lessons the books do. Moreover, it won’t make you grow as a human. Luckily, the books are still there.

Here's a snippet from the animated Moomin series. You can find most of them in English on YouTube.