Around the world, Verne style


Jules Verne’s Around the World in 80 Days was published on this day in 1873. It’s a busy date. Charles I was beheaded in 1649, Oliver Cromwell likewise, though posthumously in 1661, Hitler came to power in 1933, Ghandi was assassinated in 1948, and Churchill was buried in 1965. Verne didn’t make it on Clement K. Shorter’s list of a hundred best books from 1898, because he was still alive at the time of its compiling, but since the date fits so nicely, I’ll write about the book anyway. 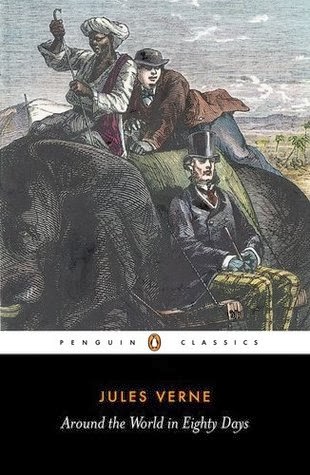 I’ve already written about my favourite Verne novel earlier, Journey to the Center of the Earth. Around the World would be my second favourite Verne. But I have only read it once. The story in all its variations is more familiar to me from films and TV series.

Like the Three Musketeers I wrote about last week, an animated series first introduced me to the story in the early 80s. In Around the World with Willy Fog, Phileas Fogg – the fearless adventurer – was depicted as a lion named Willy Fog. All characters were anthropomorphisms of various animals; the good guys were felines and all the crooks were canines. It was shown once a week, and woe if I missed an episode. (This was before we had a VCR.)

I was a bit older, twelve or so, before I read the book. It turned out to be quite different from the animated series with themes I was too young to fully comprehend. Some plots, like saving Aouda from the funeral pyre, were changed in the cartoon. And while it’s perhaps natural to avoid that topic in a children’s series, it’s actually very rarely used in other adaptations I’ve seen either. The woman is rescued, but from various other perils.

Around the World in 80 Days was a wonderful book to read as a child. All those exotic countries, the adventures, and the excitement of the chase, as the detective Fix from Scotland Yard tries to keep up with Fogg, tickled my imagination perfectly. Not all adaptations I’ve seen have managed the same, but they are rarely so bad I wouldn’t watch them. And nothing beats the cartoon. Perhaps not even the book.

Here are the opening credits – the English version, which I have to say is not as good as the version of my childhood. You can also watch full episodes on YouTube.

Posted by Susanna Shore at 19:13 No comments:

The magic of the musketeers


I’ve been slow to start the blog this year, but let’s hope I’ll continue with regular posts now that I have. The first book of the year is The Three Musketeers by Alexander Dumas for no other reason except because there is a new series based on it. The book is also number 55 on Clement K. Shorter’s list of the hundred best books from 1898 so it will serve two purposes at the same time. 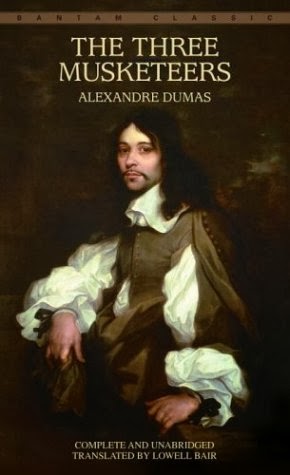 Choosing a TV series as a prompt for a book blog post is apt, because my relationship with the Three Musketeers is mostly based on TV and movies. There was a cartoon in the early 80s (Dogtanian and the Three Muskethounds in English, but with a different name in my country) that first introduced me to the characters and the story. I loved it, and watched every episode religiously. There was also a TV series from the 70s with Richard Chamberlain as Aramis, which I saw when I was a little older that made an impact.

The influence of these series was so strong that when I finally read the book I couldn’t recognise it. The names were different than in the cartoon, and the makers of both series had taken liberties with the story. So the reading experience was as much about unlearning things that I had learned incorrectly as it was about the story itself.

There was an article on the Guardian last week that pretty much stated the same. The Three Musketeers has long been free game when it comes to artistic interpretation. Some of the adaptions manage it better, some less so. I’ve generally enjoyed most of them – even the bizarre steam punk version that the article maligns. But I’ve allowed these interpretations to mess with my head, and I’m not sure, which stories belong to the original and which are modern inventions. However, as long as I enjoy the story, I don’t really care.

Posted by Susanna Shore at 16:51 No comments: